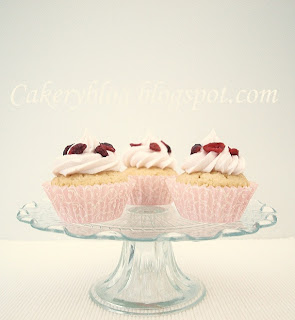 Cream together butter and sugar in a large bowl. Beat in the lightly whipped eggs a little at a time, whisk well after each addition.

Sift flour, baking powder, baking soda and salt together. Stir half into the egg mixture along with half the milk. Gently mix the ingredients together and add the rest of the flour and milk.
Sift the cranberries from the juice, keeping the juice, and fold into the batter.

Fill each hole in a muffin pan two thirds up. Bake in an oven preheated to 180°C for 15-20 minutes or until the cakes are light brown or a toothpick inserted in the middle comes out clean.

Allow to cool slightly in the pan before removing to a rack or plate. 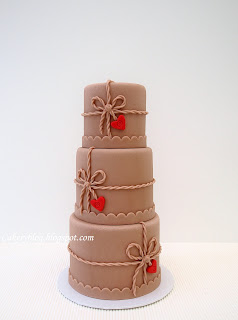 ﻿
I´ve had these mini-dummies staring at me for a while now, begging to be coated with sugar, so last night i made this little "warming up for Valentine" thing.
Indsendt af PiaMarianne kl. 2:06 PM 3 comments: 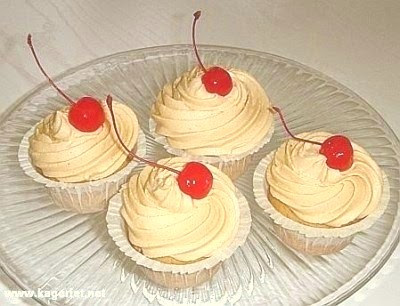 Mix butter, peanutbutter and brown sugar to a fluffy texture- about 3-5 minutes. Add the eggs one at a time. Beat well, while adding the vanilla. Mix in a seperate bowl flour, baking powder and salt and add this to the mixed peanutbutter with the milk.
The batch becomes rather sticky and "hard/dry. They raise very nicely in the oven.
Oven: 175 g. for 15-20 minutes - check with a baking needle after 15 minutes.

The peanutbutter frosting is also very tasty on

Preheat oven at 180 oC. Mix butter, brown sugar, eggs, flour, baking soda and cocoa in a large bowl and beat with a mixer untill smooth. Gently fold in sour creme with a metal spatula and pour in cupcake-cases with a spoon. Bake for aprox. 20 minutes.

Email ThisBlogThis!Share to TwitterShare to FacebookShare to Pinterest
Etiketter: Recipes 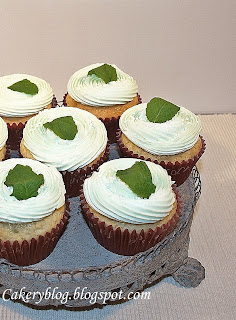 These are incredibly tasty! This recipe is more or less adapted from Desserts Magazine - if you ask me, don´t hold back on the lime!


In a large bowl, beat butter, zest and sugar until light and fluffy.
On low, beat in eggs and yolks one at a time, then  add lime, mint extract and lime juice. Mix until just combined.

Add the sifted flourmixture from before, and the buttermilk alternately.


When the cupcakes are done, poke them with a toothpick. Brush with syrup - use up all of the syrup!

Email ThisBlogThis!Share to TwitterShare to FacebookShare to Pinterest
Etiketter: Recipes 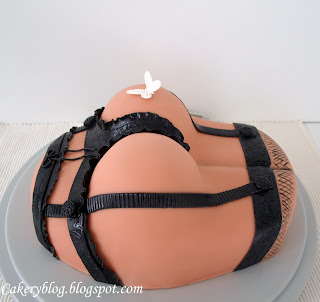 I´ve made a few of these before, but this design is borrowed from a cake-friend of mine: http://www.metteskagedroemme.com/ so all credits goes to her, she´s such a cool cake-designer :) 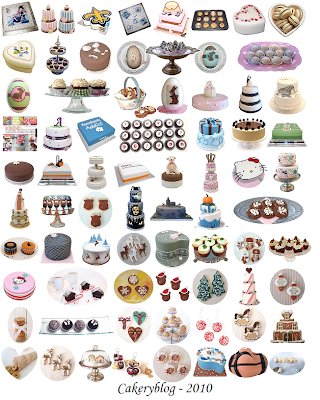 This is what i used my limited amount of sparetime for in 2010.
Many dummies in between, but still - a lot of calories!
Such a tastefull hobby this is.

Fun and interesting things happened in my small cakeworld in 2010.

The Saints Cake was posted on a NFL-forum, and the feedback was quite interesting. Someone called it a decorated orga** - Spoken by a true Saints-fan.
Another one on the forum saw this website and compared my work with Ace of Cakes and Cake Boss! -Of course hugely exaggerated, and i promise not to let it get to my head ;)

Then there was the book. It was a pleasant surprise when it got published, and my pictures really were in it! Plus i still can´t get over, such fine company! I mean... Lindy Smith? -Cake Lava? - And then Piamarianne from Slangerup... that´s an odd feeling!

For Scandinavian Cakeshow 2010 i was invited to bring a cake for table of honour. The honour was all mine! :)

A lovely cake-shop, Sofisticake opened in Roskilde. I get to exibit my dummies there and a local newspaper made an interview with the owner, publicing large photos of my Oilily-dummy. Costumers there sometimes actually asks to buy my dummies. I don´t know what anybody will use a 5-tier weddingcake for in a private household, but i take it as a fine recognition of my work.

One of my idols, Colette Peters clicked by Cakeryblog. Recieving an email from Colette herself - the maker of cakes to the Clinton´s amongst others almost made me a little dizzy :)

Finally, i had a cake on Cakewrecks! That would make any cake-maker shiver, but fortunatelly it was in the Sunday Sweets-section :)


Even though i don´t live off the cakes or run a business, i find it fascinating to see how many people come by my blog everyday. I´d like to thank you all for that. My hope is, that you get inspired by my work, as i get inspired around the internet.


Here´s hoping for lots of fun in a wold of sugar for everybody in 2011! 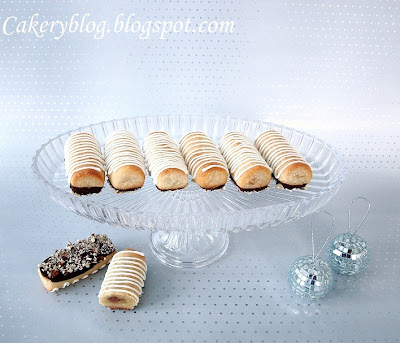 In Denmark we like to eat "Kransekage" for special events like new years eve, followed by a glass of champagne when the clock strikes midnight. A very odd combo, because they are very sweet in taste, and champagne is often very dry but nevertheless...

Blend ingredients and fridge for 3-4 hours or night over. Roll the dough into a long "sausage" and slice it like a hot dog. Cut into pieces of aprox. 6 cm. Insert the nougat and then form into triangles or whatever shape you like.

Dip the cakes in melted chocolate and place on a plate with chopped pistacchios or almonds.

This portion makes about 20 pieces.

Tip: I add a couple of tblsp almond-flour to the dough for a more intense almond-taste.
Indsendt af PiaMarianne kl. 9:05 PM 2 comments:

PiaMarianne
Denmark
This blog is about my hobby, cakedecoration. I don´t sell cakes, but am content with spoiling my surroundings with delicious little pieces of art now and then. If you use any of my designs online, please link back.